I met Robert Lax in 1985, after reading about him in monk and writer Thomas Merton’s The Seven-Storey Mountain and discovering he was living on the same Greek island I was. At the time, Lax was mostly unknown, except to Merton fans and a growing number of avant-garde poets and artists in Europe and the United States. In the 15 years before his death in 2000, I visited him every year as his popularity spread, although his poetry was published only by small journals and presses. 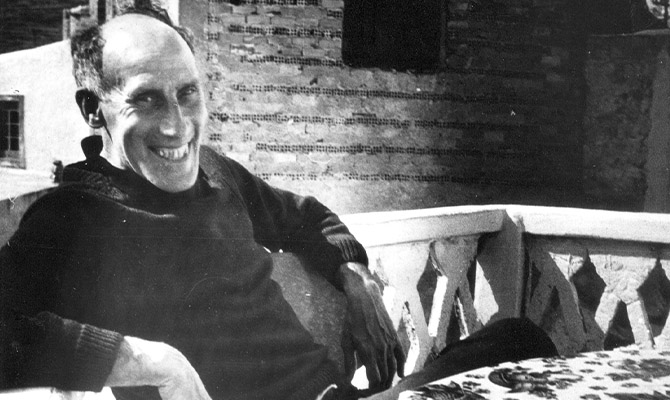 The poets and artists who first discovered Lax admired his fresh approach to poetics, the simplicity of his distinctive style, and his ability to present a transcendent vision in surprisingly few words. It wasn’t until his death, however, when Grove Press and Wave Books published new collections of his work and my biography, Pure Act: The Uncommon Life of Robert Lax, came out that his strikingly original poetry and inspiring life became better known.

Lax was born in 1915 to Jewish immigrants in Olean, New York, where his father woke him before dawn to watch the circus arrive by train and set up in a nearby field. They would attend performances, too, and Lax would never forget the joy of watching acrobats, clowns and lion tamers thrill a crowd.

After graduating from Columbia University, Lax stayed in New York City and achieved early success publishing his poems in popular magazines such as the New Yorker, where he worked for a while. Eventually, though, he grew tired of the commercialism in New York, as well as traditional poetic forms. Working at a Catholic charity in Harlem inspired him to seek a simpler, more purposeful life, as well as a truer approach to writing—one free of what he’d begun to view as artificial conventions.

While still in college, Lax and his close friend Merton did two things together that influenced Lax for the rest of his life. One was studying the writings of religiously-minded authors such as Aldous Huxley, T. S. Eliot and Thomas Aquinas. The other was attending jam sessions in which jazz musicians playing only for themselves and for each other played with more joy, harmony and even expertise than they did in performances.

The interplay of these two activities led Lax to a concept he called “pure act,” borrowing the term from Aquinas, who applied it to the nature of God. To Lax, those jazz musicians, who had developed their playing through years of practice and performance, became pure act when they played their best while improvising with others, living fully in the moment.

Lax’s search for a better place to live and truer poetic approach was, at heart, his own pursuit of pure act. Because he needed to earn a living while searching, he tried script writing in Hollywood, studying philosophy and teaching in North Carolina, and editing a literary journal in Paris. Then, having heard Greece was cheap, he moved to the islands and found the home he desired among the simple fishermen and sponge divers there—people who seemed to know instinctively how to live lives of pure act, both as individuals and as a community.

Although he was born a Jew, Lax followed Merton into the Catholic Church and, as his life developed a deeper spiritual dimension, came to embrace faith of all kinds. It was during his most Catholic years, in the 1940s, he met the people he thought best embodied pure act: the Cristiani Circus Family. Here, he thought, was a large spiritual group of robust people who were the world’s best in their demanding, creative craft yet open, friendly and full of life. Each was a talented individual but the highest expression of their art depended on cooperation with one another—that and being fully present in an expression of skill and art that would happen only once.

After meeting the Cristianis in New York, Lax visited them at their winter headquarters in Florida and then traveled with them through Western Canada, performing sometimes as a clown. Along the way, he took notes for his first and still best-loved book, The Circus of the Sun, as well as a second volume, Mogador’s Book (eventually published together with a third circus cycle, Voyage to Pescara, as Circus Days and Nights).

In these two books, in which he compares the setting up of the circus and the performance of its stars to the creation of the world, Lax’s combines the lyricism of his early poetry with the sparer approach he’d develop later. Rhythm and repetition, along with brevity and exaggerated verticality, give individual words added meaning and weight, while his compassionate and perceptive vision evokes the joy, wonder and mystical nature of the transitory circus experience.

Lax published 20 books and over 600 poems in his 84 years. His greatest accomplishment, however, was to become an embodiment of pure act himself. Being with him in his humble island home meant being present, in every moment, with a fully engaged, fully loving, and always creative human being.

Go back to Circus Days and Nights